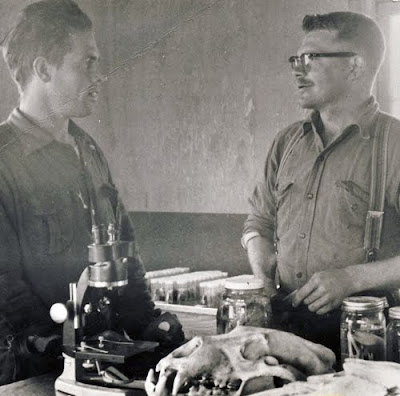 RW Ritcey and Herb Green
I was sifting through my copious volumes of photos this morning, looking as I do for inspiration for something non-typical to write about when I came across this photo. In it are Dad and his friend Herb Green both of whom have changed remarkably little in the almost 50 years that have intervened since the photo was taken.
What struck me as interesting, apart from how well the two friends have weathered the years, was the similarity of the items in the photo to what I have surrounding the heap of papers that make up my work station. Sitting above my desk is a dissecting microscope fairly close in vintage to the one pictured above and a grizzly skull sits on a shelf off to my left – I’m assuming the skull in the photo is a grizzly simply by the size. And while my collection of jarred specimens is not nearly quite as impressive or orderly as those in the picture – the interest in the collected items is similar.
Dad was one of the first scientists to study the flora and fauna of Wells Gray Park and, as the daycare options were limited in those days, we kids got to tag along. At a very young age we were exposed to things like tagging moose and the subsequent picking of “moose ticks” off of all the participants in the exercise. And as we were living smack dab in the middle of the wilderness at the time, a lot of Dad’s projects followed him home and we were raised concurrently with an interesting assortment of study subjects that quickly transformed into family pets.
Apart from our strange collection of critters one of my earliest memories is of the smell of formaldehyde. Formaldehyde was one of the most common preservatives back in the day. Everything from embryonic moose to giant water beetles would find their way into jars of the stuff to be preserved and studied at a later date or sent off to provincial collections down in the far-away Victoria. I was always fascinated by the specimens hovering in those liquids and for some reason never pictured them as being recently demised but instead could always picture them as running or swimming about in their natural world.
To this day, if I get a whiff of formaldehyde my mind goes back to my childhood and one specimen in particular – a yellow bellied marmot. Now the animal itself was not preserved in formaldehyde but it had been stuffed and I don’t know if the hide had been cured in formaldehyde or what but it definitely had a different smell to it. The specimen had quickly become a surrogate for a stuffed toy that had been left behind when we had moved to the big city and I would cart that thing everywhere with me. We must have been quite a sight for our neighbours – that strange red-headed kid from the mountains, toting around that dead animal. Much to my dismay though, I had forgot my stuffed marmot outside one evening and the neighbourhood dogs tore it into a million pieces – bits of my marmot were scattered up and down the street. Without my trusty, but admittedly unnerving-to-others companion, I was forced to start making friends with the city kids and I started to make the long transformation into a “townie.” But that is a subject of a whole different posting.
I still love to poke and prod about the natural world but now I find the digital camera and video camera are good alternatives to the jars of formaldehyde or stick pins. 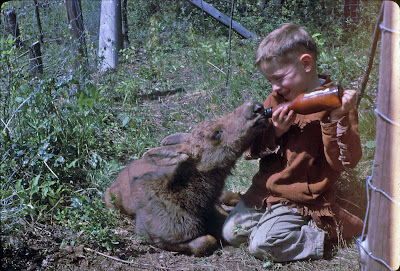 “Lippy” the moose -dad’s project and my buddy!