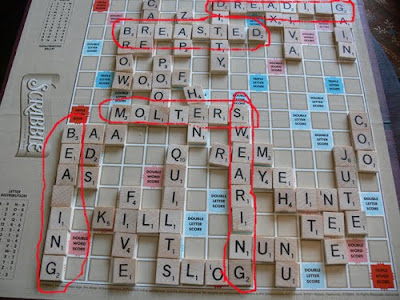 what was the score?

Scrabble, or as we like to call it “Fight in a box”, is a great game for those long winter nights. Actually it’s a pretty good game anytime but there are many other outdoor interests that seem to trump the game throughout the summer.

My grandmother was an avid scrabbler and I can remember sitting around the huge kitchen table playing with her and my aunt and uncle. Having about 8 words in my vocabulary at the time I was at a distinct disadvantage but I was content to wait for the letters “P”,”I” and “G” to appear so that I could try to spell hippopotamus – the more astute will figure out that spelling was not my strong suit.

As the years progressed I improved marginally and now realize that there is no “G” in hippopotamus – unless you are using it as a verb of course. You should also have surmised by now that playing Scrabble with me makes for a long evening.

My best scrabble game ever I recorded in the above photo and I doubt that I will ever have such good fortune ever again. As my father was wont to say “Even a blind pig stumbles on an acorn now and then”.

My question to those that have the power to figure out such things – I haven’t found it on the net yet – is to figure out what the highest possible score a person could make in a scrabble game. The secondary challenge is to find out what the single largest score on one play could be. For an interesting read check out this Slate article on the highest score in club play.

Prizes will be awarded but the prize list has changed slightly – that thing that was moving around in my pack is no longer moving so shall now be offered as a second prize instead of a first place award. The first place prize will be  my Edgar Rice Burroughs biography.