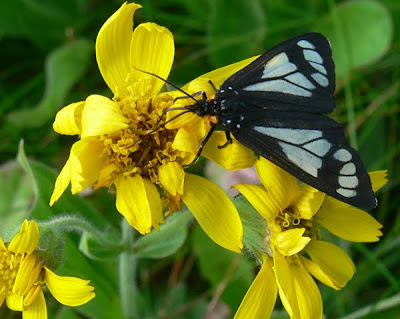 Vermiculata – that’s the latin name for this moth 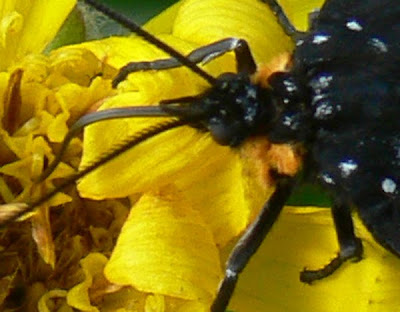 Vermiculata up close and personal

So I took this picture of a moth. It’s a Vermiculata of some type or at least that’s what I’ve been told. The truth to be known I probably wouldn’t know a Vermiculata if it came by and bit me in the . .  . Well you get the idea, I’m not really much of a Lepidopterist but because of my camera, I can take a picture of something interesting – get onto the internet and search the image – or go to a chat room – or post a note on a Google Group – and before you know it, I know it!

Not only does the camera allow you to identify things it allows you to study your subject in great detail. Take this specimen for example. When you zoom in on it you notice some interesting things.

First, I noticed that its proboscis is about the length of its body. On us that would mean a tongue that would reach to the floor. It would also make for interesting mealtimes as you wouldn’t have to keep asking your children to pass the jam or eggrolls – you could snag pretty much anything within a 2 meter radius of your chair.

Secondly I noticed that this insect appears to have multiple eyes. While I know that arachnids quite often have multiple sets of eyes, I have never heard of it in moths. Now that gives me something to research – are these real eyes, pseudo eyes to trick predators, or perhaps adornments to make the ladies stand up and pay attention. It gives a person lots to think about – and while I know I could turn my thoughts towards solving third order differential equations or solving cold fusion – I think pondering the wonders of nature much more fruitful.