I am sitting here, quite comfortably I hasten to add, in the well appointed Delta Hotel in downtown Winnipeg.

Addicted as I am to maintaining my blog I spent the ten bucks it costs to get a connection for the internet and am happily catching up on my emails, blogs and other posts. Quick aside: Why is it at the Super Eight or the Blue Bell Motel in Fort St. John you get free wireless internet but the more expensive the hotel the more they charge you for what should be a free item?

So the trip out was quite eventful. Apart from our plane being two hours late in Calgary, I had the unexpected joy of attempting to give birth to a four pound kidney stone. Those that have had the joy of kidney stones will know of which I speak, for those that haven’t – try to imagine a rabid ferret trying to gnaw it’s way out of your lower intestine. The trip seemed to take forever but we finally landed in the (and I don’t know what colloquialism they use for Winnipeg is but you can insert it here) city and we were met by my bleary-eyed in-laws. It was shortly after midnight their time.

I am afraid I was not much fun as we made the one hour drive back to their place. Unlike the strong silent types I am more of a free spirit when it comes to expressing my pain and I was howling like a coyote with a leg in a steel trap. Their threats of taking me to the local vet/doctor must of had some type of physical effect on me and the stone finally stopped. As long as it doesn’t start moving between now and the end of the taping of the show tonight I will be fine.

I met up with Marc and Jason at the hotel and had a good time chatting with people equally as warped as I. Both Marc and Jason are like Brainiac from the old superman comic books  – okay maybe they are not super-powered evil types but they are super smart and actually know stuff – I just know how to make obtuse references to stuff and they actually know what an obtuse angle is.

We made our way over to the CBC building where we met up with Saundra Vernon the other contestant and after quick introductions made our way up to write our one hour challenges.

Jill Walker, who looks after all of us contestants said I looked horrible but after I assured her that this was in fact how I normally looked she allowed me to continue to write. I was in fact feeling a little under the weather but had brought my secret weapons along: Mars bars and Tylenol. The tylenol would cut the pain and the Mars bar would provide mental alertness by depositing large amounts of sugar into my system.

I can’t tell about what I wrote or how brilliant I was or wasn’t but I did make it through the two hours and with the writing behind us we went out for supper and some drinks.

It was great being around people who shared the same sense of humour and could follow your logic no matter how convoluted it might be. I will sign off now and the next post will be after the competition and then we will never speak of the mother corporation again. 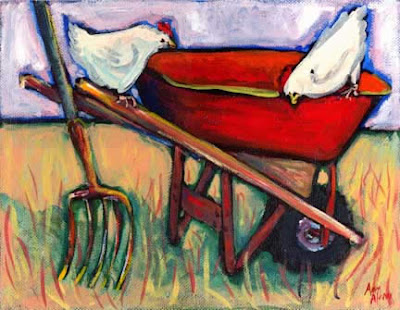 I had a very good English professor at UBC way back in the dark ages, I think shortly after Shakespeare had packed it in and just before disco, whenever it was it was a long time ago. She had taught me many things but one thing she had told me was that the mark of a good poem, such as The Red Wheelbarrow, was that after reading it – would you ever be able to think of white chickens without the red wheelbarrow?

I think, had she not told me that, it would have been very easy for me to think of a white chicken without that damnable wheelbarrow but now I am forever linking the two.
So, good reader, I present my own experiment. After reading, the Yellow Canoe, and some ten years hence, let me know if you can ever come across the term yellow canoe without thinking about the emerald green waters.
The Yellow Canoe
by Frank Ritcey
so much piled
within
a yellow
canoe
top heavy
with beer
slicing through
emerald green
waters 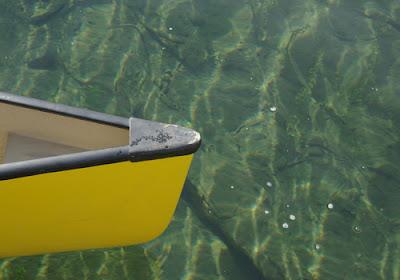