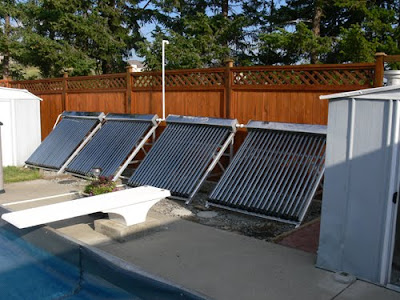 I know I don’t strike many of my new acquaintances as being much of an environmentalist – especially since over half of my wardrobe is camo – but I do believe in doing what I can to make things a little easier on our planet.

I will have to, at some point, trade in that big diesel burner I drive – but it was a necessity in my past life and I can’t afford to part with it quite yet – the book value is about $12 and I doubt that I can buy a hybrid (even a used hybrid) in that price range yet.

So instead I make a difference in other ways. One of our vices is a swimming pool that came with the house we bought. One of the biggest costs of running the pool was getting it up to a temperature that everyone in the family thought was appropriate – somewhere between poaching eggs and boiling lobsters – and although I am more of the luke warm type of guy, I was overruled and we paid the piper in terms of a large gas bill.

A cursory exam of solar systems led me to believe that not only could we cut down on the greenhouse gases, we could also cut down on our expenses and I set about researching systems that would work for us. I shied away from plastic components as I knew they would not weather well in the sun and was worried about the freeze and thaw cycles of Kamloops. I settled on glass vacuum tubes that were relatively inexpensive and could be installed without a lot of fuss or muss.

I tracked down a dealer in Kelowna –Okanagan Home Center – and was quickly a fan of the proprietors Dave and Cheryl Kelly (email: okanaganhomecenter@shaw.ca). Dave and Cheryl are good people to deal with and seem truly concerned about your satisfaction as a customer. They are committed to the solar industry and have tons of experience with pools and spas and had lots of good advice for a neophyte plumber such as myself.

It took me only two days to construct all of the panels (there is of course – some assembly required) and to plumb them into my water system. The system is incredibly efficient. I will post a video of how you can take water at about 10 degrees Celsius and raise it to the boiling point in about 35 minutes. Because ours is a large pool and we are high on the mountain where the nights get cool we need a fair number of solar panels to get the pool up to the temperature we want. Right now I have 5 panels and will probably add another 2 to get us into that slow boil range that is so soothing on old bones. Homes in the valley would probably get away with about 2/3rds of the panels that I need.

Check out the WSE Technologies website – that’s where the stuff comes from and then give Dave or Kelly a call and they can get it out here before you can say “Al Gore was right”.