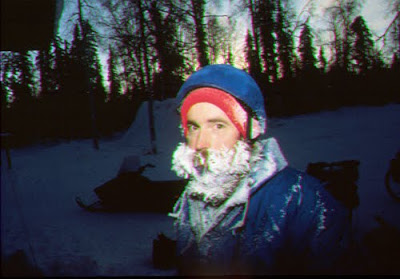 I was interviewed by one of the producers at CBC today and was asked what my proudest moment was. I had to think about it for awhile and it finally came back to me – the moment I lay my bike down at the finish line of the Iditabike. There by my lonesome at the Knik Lake Bar, I swaggered in and ordered my first beer. I had just finished 320 kilometers of quite possibly the hardest bike race in the world and I was going to celebrate.

I had given up beer – and any type of alcohol for that matter – the day I decided I was going to train for, enter and complete this ultra-endurance ride in the frozen wilderness of Alaska. Most of my reasons for entering were purely practical: my brothers said I couldn’t do it and as we had all been drinking heavily when the conversation came up I had to argue that I could and because one should never back down from an alcohol induced assertion I weaved into the house, retrieved the magazine with the entry form, dialed the number and signed up on the spot.

Since the entry fee was non-refundable I thought – What the heck – and started a rigorous training regime. That regime consisted mainly of reading books about people that had done really brave things and trying to avoid books that mentioned people freezing to death and/or being forced to eat their companions. I did actually buy a bike and rode it a few times but I knew that one did not wish to overtrain for an ultra-marathon as one should conserve his energy for the long journey ahead.

The race was quite an epic journey for I and the other seventy some souls that started. There were a few who did not finish, many who froze bits off, and some who laughed in the face of adversity (Those guys doing the laughing were also the ones who made use of Alaska’s then very liberal laws regarding the cultivation and possession of marijuana).

The 320 kilometre race followed a portion of the same trail used by the mushers in the famed Iditarod dog sled race which was to run a week after we finished. The race conditions were favourable, -40 and very little wind. The trail was good in most places but there was one 80 kilometre section where we had to push our bikes.

The first leg of the race took me 24 and a half hours to complete and I was a little cold, cranky and tired by the time I made it into the checkpoint for the mandatory medical check and 6 hour layover. I ate three cheeseburgers there, bought two more – storing one under each armpit – to keep them from freezing solid – and to ensure no-one asked for a bite of my burger on the trail – and then headed off into the brutal cold that was the long Alaskan night.

I had some grand adventures on that trip – many of which I am sure must have just been tricks of the mind – tricks of a mind fighting to stave off death by freezing. The one thing I do know for certain though, is when I crossed that finish line, some 54 hours after having set out, I was ready for a beer.

Thoughtfully the race organizers had placed the finish line next to the last outpost of humanity – the Knik Lake bar. Because racers were straggling in over a five day period the race organizers knew that they could stay warm and entertained in the bar and that eventually we would all end up there anyhow.

The barmaid was great. She was marginally taller than she was wide and she had just informed one poor mountain biker from California, who had mistakenly thought he wanted a cooler, that “We serve whiskey or beer” and emphasized the point by spit polishing the glass she was holding. I ordered a bottled beer. She opened it with a flick of her thumb which was impressive because it wasn’t a twist top.

I never got on a bike again for at least six months after that race. Any ride after that just seemed anticlimactic.