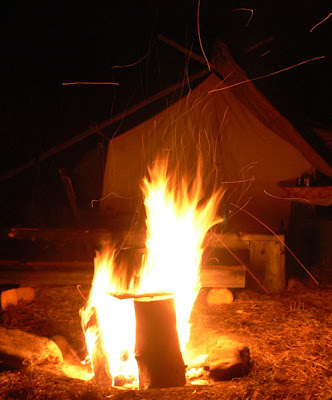 campfires are always a good source for inspiration

Okay, that was the distress call used back in the old days of radio and is probably still in use today – although I have not seen it employed in anything that didn’t have Humphrey Bogart as the leading character. It is a crude derivative of the French m’aider and was something that was easily recognized over the cruder radios of the day and when repeated three times meant the caller was in “grave and imminent” danger.

So it is with me as I am staring at a blank screen and trying to think of pithy things to write to prepare me for the upcoming Canada Writes competition. Unfortunately I am pith-less today and all I can come up with is parodies that involve Captain Kirk, Spock and the ever outraged Bones.

I had put out a call to my facebook friends to send me what they felt was the ultimate Canadian song and will be rewriting those all day today. I found it amusing that the folks at CBC gave one of the finalists in the east the Anne Murray classic “Snowbird” to rewrite – obviously the contestant did not heed the advice given a few posts back and missed a great opportunity to wow them with a song about a dead cat.

I have a few good tunes in my arsenal now but don’t wish to share them on the off chance that one of the producers sees that I have already covered the tunes and would have an unfair advantage over my fellow writers. On the other hand they might just take pity on me and give me that foot or two headstart that my gym teacher always gave me when I had to race against the other kids.

Well I will churn out a few more songs and then turn my attention to capturing some video from my last field trip.