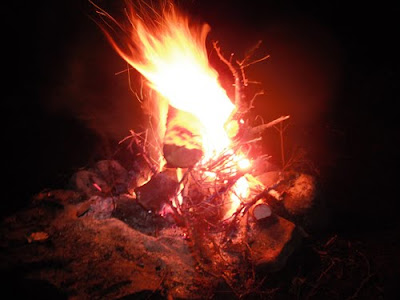 The fire around which I like to sit and tell stories

Okay, maybe lied is too strong a word, but I did say I wasn’t going to post another blog until my return from Vancouver – triumphant or otherwise. But events have conspired to such a degree that I thought I had best write this last entry.

So in preparation for the writing contest I thought I’d best buy a pair of glasses so that I might be able to read what it was that I had written. My eyesight, up until 78 days ago had been very good. Then one morning I awoke and the crisp clear words I used to read had become no more than fuzzy little ants scurrying about the page. Every now and then they would morph into legible words, but more often than not they were just fuzzy ants.

It was then that I started wearing glasses. Just readers mind you, as I can still spot the neck hairs on a mule deer at some 200 paces. Close up work is an entirely different matter.

I had a pair of dollar store glassed but I thought one should always have a backup set as one would not want to lose the competition due to poor eyesight – far better to lose out due to lack of writing skills and then blame the glasses. Anyways I went to the local druggist and bought a pair of readers which, upon a cursory exam looked adequate.

Now that I have them on at home however I am starting to understand how a fish in a glass bowl feels. I now have 340 degrees of peripheral vision. Unfortunately anything but that directly in front of these portable microscopes is badly distorted – somewhat akin to a very bad trip on LSD – or at least how they used to portray acid trips back in the 70’s public health films.

So now I must return to the store and get a pair that are a little less intense. These I will keep for studying molecular biology or starting forest fires.