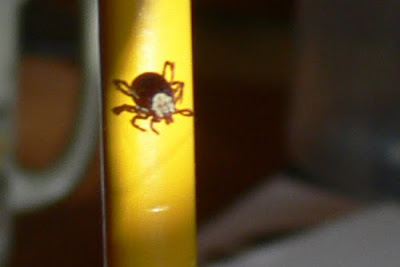 On my last hike into the mountains with my buddy Gerry Shea the noted author of hiking books and co-conspirator in the great “Contact Explosives” caper I think I mentioned that I was hunting for ticks. Maybe I didn’t mention that but I should of.

Now I have to make a mental note to myself at this point – okay, maybe I’ll just make a blog entry instead as that mental note thing wasn’t working out too well, couldn’t find a pencil – but the note is that I should blog about Gerry’s discovery of an underground manual that circulated back in the early 70’s. That manual told how to build all types of very dangerous, and thus very cool, explosives. We successfully made our way through almost two of the recipes before Gerry was whisked off to the emergency ward at RIH with shrapnel wounds. The manual was lost to time and we have since mellowed. Anyways, the long version of the story is quite good but I think I may have given away the ending, but I didn’t mention the part about the police chase, the swim for freedom, or the encounter with the one-armed fugitive – so there is probably enough material to keep a reader interested if I work it correctly.

But that was a pointless detour from my tick talk. As I had mentioned I was out searching for ticks as there had been considerable discussion about the arthropods on the naturalist chat line of which I am a member. I had vision of me going out with my tee-shirt tied to a stick and collecting great quantities of the animal so that I could then expound ad-nausium about how to collect ticks. To the untrained eye it looked like a yeti was running about waving a flag of surrender. To the trained eye it looked pretty much the same.

What was interesting to note was that my ticks were two different species. I had both the Rocky Mountain Wood Tick and the Dog Tick. At least that is what I think these are as I am no entomologist but a cursory exam of the literature suggest that is what these are. The one will fetch sticks and the other yodels so that pretty much clinches it.

I was trying to get some photos when my herd of captives tried to make a break for it. Since the other members of my household have some strange aversion to getting the various diseases that these ticks carry I had to spend the better part of the day rounding up the escapees. In the end I was still one short so I made a cut out of a small piece of brown paper and put that in the vial with the others. No one is going to look close enough to notice the switch and I can get on with important things.