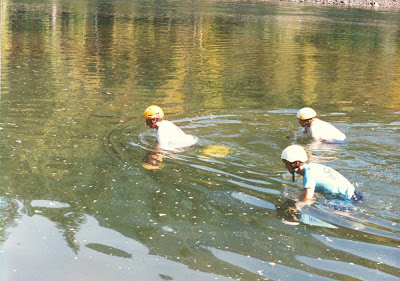 Out for a ride?
My friend Jason (lower right) just had a birthday and I knew I had to send him this photo. The three of us; me, Noah and Jason, were having a contest to see who could ride the furthest out into the river on our mountain bikes.
The contest seemed like a pretty good idea until I got out over my head and then remembered my feet were stuck in the toe clips and I am far from being a good swimmer. I swallowed a lot of river that day and Jason and Noah had a good laugh about it.
I really couldn’t fault the two for it was pretty funny – seeing your buddy struggling between life and death and trying to swim while packing a mountain bike under one arm. The insensitive clods!
But what was funny was when on the next day we rode up to Sylvia falls and I played a little trick on Jason. After leaving the falls we tried going further up the trail to Mahood Lake. Now the trail is very steep on one section and we had to push our bikes up the narrow trail and we finally tired of that, left our bikes, and finished the hike on foot. On our return to the bikes we stopped and had a little lunch. While Jason wasn’t watching I unhooked his brakes. Now that was funnier than a man drowning! Jason, was a very good rider but even he had to bail after about five seconds. We all had a good laugh about it (well Noah and I had a good laugh about it).
I think it was shortly after that, that Jason retaliated by hiding about ten pounds of rocks in the bottom of my panniers at the start of our ride up to the top of Baldy Mountain. Now Baldy is about a six hour climb on the bikes with nary a level piece of ground on which to catch your breath (we did it once in under two but that was during a race). Anyways we started out in good spirits but I just couldn’t seem to get my wind that day and my legs felt like lead as I struggled to keep up with Noah and Jason. About three hours into the ride I had a flat and had to go into my panniers – when I found the rocks I was not a happy camper! Noah and Jason again had a good laugh about it.
Those were the good ole days – we rode most everyday – wind, rain or snow. Actually the worse the weather, the greater the adventure. My bike is still hanging in the garage, perhaps I’ll dust it off and coast down to Tim Hortons one day. 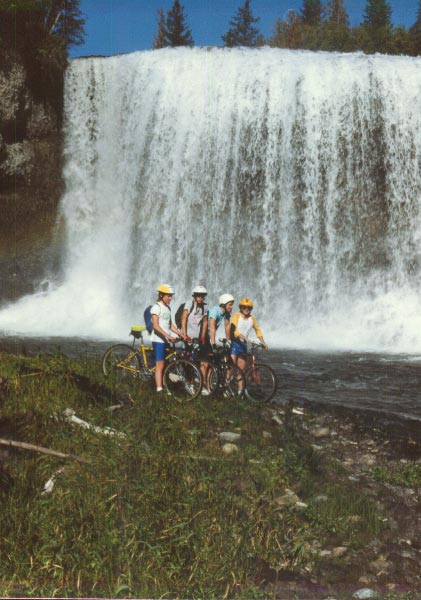 Dr. Dirt and the Masters of Mud at Sylvia Falls