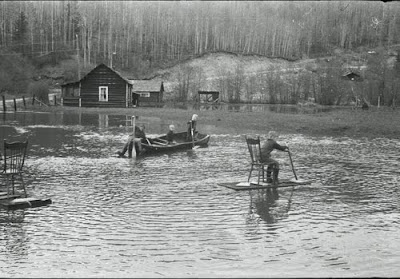 Okay, haul up your suspenders for this one, cause it might get pretty deep by the end of the story.

Raised as we were, in the outbacks of British Columbia, our choices for entertainment were limited. We had a monophonic record player and a well worn copy of the Sons of the Pioneers, we had beagles which you spent as much time hunting for as hunting with, and we had gramma’s kitchen table. The table itself wasn’t that interesting but the people that gathered around it in the evening were a colorful lot.

Uncles, who drew the musical straws in the gene pool, could play guitars and sing. Gramma would play the fiddle when she wasn’t tending to the prodigious amounts of food she would have to prepare for our crew, and those of us who couldn’t sing, play or cook, would end up telling stories.

I don’t know who to attribute this following story to but it was always told to me as being gospel and I repeat it as such. There was a father and son team of trappers a few valleys over that were by most accounts two of the least motivated people in the history of the great Canadian fur trade.

Joe and Little Joe were out beaver trapping one beautiful spring day and as was their custom had stopped along a grassy knoll along the creek and had stretched out for a mid-afternoon nap. Little Joe, awakening after only a half hour or so of slumber turned to his father and remarked:

Joe’s response was the now legendary, “Yep, I reckon we’s a goner!”