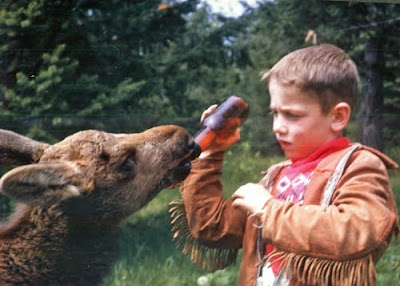 Lippy the moose – the one on the left – and young Frank
Although my official birthplace is listed as the Royal Inland Hospital in Kamloops, I’ve always considered Wells Gray Provincial Park as my real birthplace; it is after all, the place where my first real memories are from. At the time of my youth, my father was a young wildlife biologist who had taken to the verdant valleys and majestic mountains and whatever other alliteration you might wish to impose upon a reader. My mother was of the pioneering Helset clan which had literally hewed wood and drawn water in the area long before the coming of roads, paved or otherwise.
Life in the mountains was about as idyllic as it could be. Our neighbours were characters that couldn’t be described, no matter how talented the biographer, nor captured, no matter how vigilant the constabulary.
My father was always bringing home another subject for study and we would quickly adopt it as a pet. It wasn’t til we moved to the big smoke of Kamloops that I realized that not everyone had a moose for a pal and that carting around a stuffed marmot was not an acceptable substitute for a teddy bear.
The years spent growing up in and around the wilds of Wells Gray afforded me considerable fodder for my yet to be published memoirs. As soon as I find the lost manuscript I will share a few of the short stories from the collection, tentatively entitled: “Tales from the dorkside” 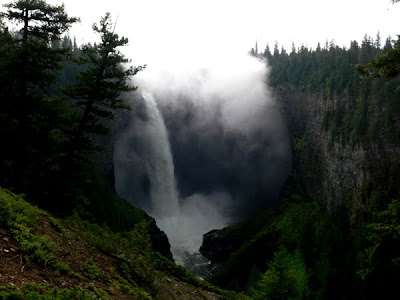