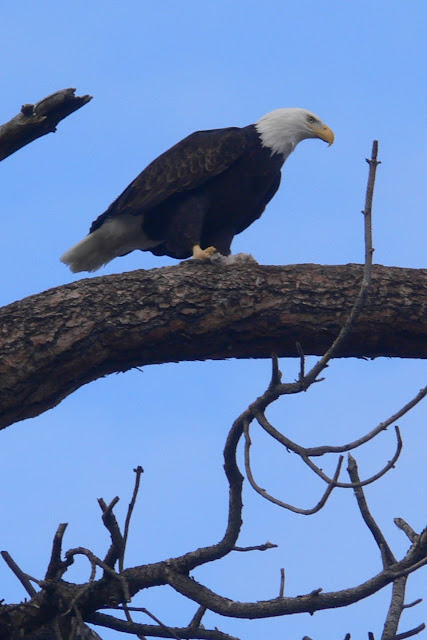 I pried myself away from the computer for a couple of hours this morning and it was well worth the effort. My wife and I made our way across to the North Shore and joined up with mom and dad for what is their daily ritual of walking out by Tranquille.

The weather was abnormally warm, even for the normally mild winters of Kamloops and it was great to see so many fellow Kamloopsians out hiking, birding, walking dogs and even a gaggle of runners were making their weekly pilgrimage out along the road.

The birds are scarce these days but, of note, was a flock of some 800-1,000 waxwings that were ground feeding on the exposed weed seeds and bits of greenery that have been exposed by the recent melt. There were your usual winter scavengers working the shoreline around Cooney bay: crows, ravens, magpies and a pair of bald eagles put on a good show for us. The eagles were interesting to watch as they had captured, or scavenged some unidentified prize, perhaps a cat, and were feasting upon it up in a big Yellow Pine snag. The magpies were being extremely bold and would crowd the eagles on the limbs in the hopes that the owners might drop the catch or at least let some little scrap fall.

Dad got some great shots of the eagle and I got some that were less so. I think the issue of lens envy is a real problem amongst the haves and have-nots in the photography world. After we had our fill of shooting the eagles we were treated to a view of a good sized herd of bighorn sheep up on the sage covered hills. These were mostly ewes, lambs and  young. The older rams tend to head off to other locales to hang out with the old boys club.

One thought on “An eagle eye”