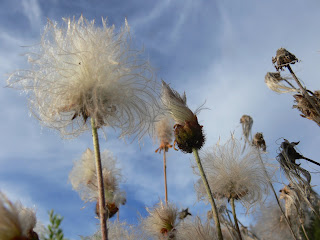 Well another KNC AGM has come and gone, and no, that isn’t a bowl of alphabet soup but the Kamloops Naturalist Club’s Annual General Meeting. It’s nice when you belong to an organization especially at my advanced age and are considered one of the “young people” in the group.

The Ritcey household did well once again at the photo contest even though we were stacked up against an impressive wall of entries. Perhaps we did so well because we are also in charge of tallying the votes! Father took the Syd Roberts Memorial trophy for the anything goes category with a photo of a Waxwing. I managed to take a first place in the “Plants” category with a photo of “Lion’s Mane.”  I am ashamed to admit that I don’t know the proper name for the plant but will look it up at some point. My other entries never got a sniff so I will be displaying them here from time to time just so they get set free.

The bigger news is that I have been appointed as one of the VPs of the club and will be working to help organize a number of field trips and some new activities to help bolster numbers and interest in the club.

But Sunday awaits and I must go see what it has to offer.