So today we are seeing what the Cowboy in the Kitchen was cooking over the holidays. I made these a couple of times and they have become the number one requested item at the Ritcey breakfast table – the previous number one request was for me to put on a shirt and to quit singing!

There is no way to pass these breakfast beauties off as being at all healthy for you so you might as well scoop on the applesauce and whipping cream, or smother them with syrup or ketchup or with whatever your particular vice is.

I am told that these are originally a Jewish dish but I believe the origins are probably more Norwegian. My grandfather was a Norsk and according to him, most great discoveries were made by Norwegians, or by people who were wishing they were Norwegians, so in deference to Thorbjorn Helset, I present my version of Norsk Latkes.

While this is going on, have a cast iron pan with about a centimeter of oil in it heating up. Use canola oil as it takes the high heat without smoking. Insert a wooden skewer to the oil and when it boils around the wooden skewer it is hot enough.

Spoon out your pancakes, a little smaller than my hand and about one and a half of your fingers thick is about right. I can get about three in a pan at a time without them touching one another. Let them turn golden brown and crispy before carefully turning. Cook til golden brown on both sides. Remove and drain on a metal rack. 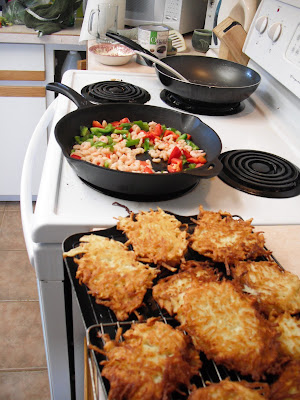