On the trail
with Frank Ritcey 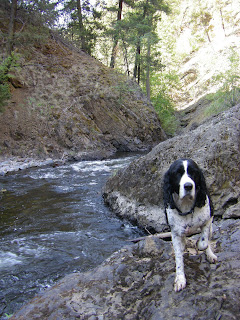 It was one of those hikes that I knew was going to go bad but my morbid sense of curiosity made me play out the hand.

The first bit of fore-shadowing was the fact that I couldn’t talk any of my cohorts into joining me on the trip. The second warning sign was that my good wife called the insurance company to ensure that our policy did not preclude acts of god or of extreme stupidity. So, without the normal moral support of companions or well-wishing from the family, I set off for the Tranquille River Canyon.

Now most locals will protest that it is a creek and not a river, but I checked and it is actually gazetted as a river. I am sure the tag of “river” was due to either an exceptional spring run-off or the fact that the person doing the naming was from back east where virtually any moving body of water gets the more regal moniker of river. I will go with the river designation as it sounds much better when I explain how I became entrapped in a river canyon as opposed to just being stuck in a creek. 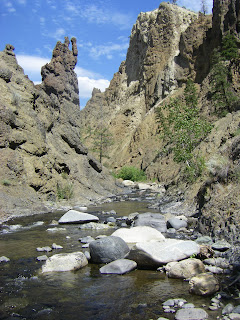 The trip is incredibly dangerous and should only be undertaken by those well versed in the ways of the wild and endowed with the well toned body of an Olympian – or by those who don’t really think things through entirely (I leave it to the reader to guess which group I fall into).

My father, who normally has better judgment, agreed to drive me to my jumping off point. He also loaned me his faithful hunting dog, Tia, as a companion for the arduous journey. Now Tia is not quite like a “Lassie” who will go and alert would-be rescuers but she will eat any leftover sandwiches and does not offer much in the way of rude remarks when I get lost or entrapped in some misadventure. In retrospect, Tia is a notch above my usual traveling companions. 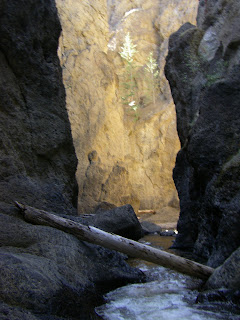 To enter the canyon one needs to slowly and carefully work their way down the steep banks of the upper Tranquille valley. The side hills here are steep and dry and one needs to watch their footing. It is especially important to watch the route ahead as there are numerous blind ends where the trails terminate at cliff faces above the creek bed.

Once you reach the valley floor you are rewarded with the sparkling clear waters of the Tranquille River. Good stout running shoes are the preferred footwear here as you will be making your way down the centre of the creek for most of the remainder of the hike. 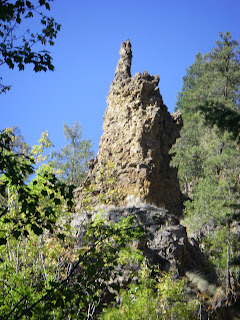 The creek bed is an oasis in the otherwise dry hills and you will be rewarded with signs or sightings of all types of animals. Bears, coyote, foxes, gopher snakes, garter snakes, rattlesnakes, deer, bighorn sheep, cougars, deer mice, voles, chipmunks, squirrels and a plethora of birds all call the valley home. Descend in the early summer and you may be rewarded with ripe wild raspberries, stand in the wrong patch of vines and you might be rewarded with the excruciating itch of poison ivy.

The highlight of the hike down the creek, oops, I mean wild river, is the one and a half canyons you get to traverse. The first canyon is where the river has cut through a lava flow and requires a short swim to get through one very deep pool about mid way through the traverse.  Take time to look up and marvel at the power of the water that, through sheer patience and persistence has worked its way through what must have seemed an impermeable barrier at one time. 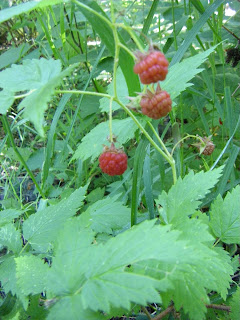 After emerging from the first canyon you’ll return to the normal tumble of boulders, and steep walled valley but don’t despair because more adventure is ahead. The second canyon, a short ways downstream of the first, is best skirted by climbing the game trail to the river left. I knew this. The little voice in my head knew this. That other voice in my head though, the one that gets me into trouble, suggested that true adventure lay down that stretch of canyon.

Upon entering the canyon I was confronted by a small drop that required me to descend a rock face. The descent was somewhat technical and I thought it would be safer if I took off my daypack – the one with all of my survival gear, my gps, my cell phone, my car keys, my wallet and everything else that I could possibly need in case of an emergency – like say getting stuck in a canyon, yep that’s the daypack that I lowered over the rock face first. The ledge I lowered the pack onto was a narrow one and was located just a centimeter or two above the raging torrent.

Retrieving the rope that I used to lower my pack with I turned to secure that same rope to a stout log with the intent of lowering myself to the ledge, retrieving my pack and then continuing my way downstream. My knot tying didn’t go all that well. By the time I had a knot secured, that would hold my considerable bulk, I turned to see, with much horror, my daypack floating downstream and over another set of rapids.

Scrambling down the rock face and making my way as quickly as a man of my girth can manage I gave chase. The chase was short lived. The canyon walls at this point are impassable and there is no option for swimming here as the final drop (waterfall) had a large log sweeper at its base that would most assuredly pin anyone foolish enough to attempt to go over the falls.

The trip upstream through the canyon was decidedly more difficult than coming down and Tia was understandably confused as to why we were backtracking up through this inhospitable piece of real estate. Cursing my poor decision to become separate from my survival gear I made my way up and over the hill alongside the canyon and then made my way back to the water.

As I sat there at creekside, dejected and wondering how I would ever make my way up the canyon, against the current as it were, I was offered up a gift by the hiking gods. There, floating lazily out of the canyon, came my waterlogged but still intact, pack. My heart soared. Everything of value, housed with foresight in double Ziplocked bags was dry and operational.

The rest of the hike was made even more enjoyable with the knowledge that karma was onside with me that day. Below the last canyon are a number of pools that require short swims and extra caution so as not to become entangled in the rocks or occasional sweeper that has, itself, been swept down into the canyon.

Follow the creek down til you come to the old water intake works for Tranquille and get out on river left and follow the road out to the parking lot where your ride should be waiting.

Total hiking time is about 8 hours giving you lots of time to stop and take photos of the wide variety of bugs, flowers, and geological formations.

Hiking level is for experienced hikers and outdoorsy types only. Having hiked Kenna Cartwright Park, no matter how many times, does not make you an experienced hiker. Go with somebody who has some scars, walks with a limp, or some other proof of having spent some time in the bush. Not a great hike for those that are claustrophobic, non-swimmers, afraid of heights or uncomfortable with snakes.

Special notes: Be sure to travel with at least one other hiker – three is better, because one can go for help while the other provides first aid or tells long winded stories to keep your mind off of your fractures. Make sure someone knows where you’ve gone and when you’ll be back. Be especially cautious with this hike if the water level is high – I leave it for mid July or early August, and never if it has been raining.